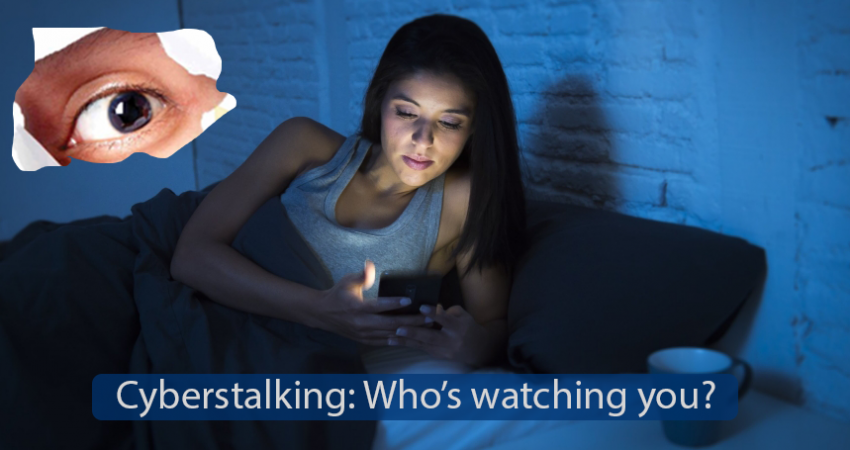 “It doesn’t matter if you say no, I’ll claim you as my own”

“I am jealous of cattie, she is mine and nobody else’s”

“He is Always so nice… I think he loves me too”

As I type and read these lines, over and over, I wonder or at least I try to understand what happens inside their heads. Can one really be so blind to think they can make someone whom they never met their own? And can one really think that, that person has no say on what they do, and that said person is entirely responsible for how they feel towards them? As much as I read I can’t find much or any sense in it, I can’t understand what they think and the rights they think they have to just simply impose their expectations, desires and responsibilities on us… It is how it all begins and most of the time it ends in ways we do not want or expect.

Stalking is something so out of Hollywood! Something we watch late at night on E! when they tell us about those infamous Hollywood stories in which stars were brutally killed by their stalkers. We got a good example of it, let’s start with John Lenon, shot in the back by his stalker in front of his own house in Soho, NY. Or that mexican star Selena, also shot by her biggest fan who previously was also a stalker welcomed to the Family for her unmeasured love for her artist… We can name many past cases and current ones. But why does one stalk? How does that begin? Why does it happen? And trust me, it’s not only a disturbance exclusive of superstars anymore.

According to the American Journal of Psychiatry on a study published on Stalkers, stalking means “a constellation of behaviors involving repeated and persistent attempts to impose on another person unwanted communication and/or contact. Communication can be by means of telephone calls, letters, e-mails, and graffiti, with contact by means of approaching the victim and following and maintaining surveillance. Associated behaviors include ordering goods on the victim’s behalf and initiating spurious legal actions. Threats, property damage, and assault may accompany stalking.” A stalker is usually a discarded partner, or a potential/would be partner of the victim.

It’s still hard for the scientific community to determine exactly what causes one individual of becoming a stalker, since according to them the victims perceptions of the stalker’s actions also influence on determining the stalking behavior.

What motivates them? What is the context behind that stalking? Well according to psychiatrists there are some typologies that can explain the motivation behind the stalking and these are: rejection, intimacy seeking, incompetent, resentful, and predatory

They can send gifts, letters, flowers, show up at your doorstep, show up at places you didn’t even know they could find you. And that happens mainly because they have found ways of keeping track of your single and every move… An ex-partner who knows you well, and your daily routine will use those information to find you and to find out what you’ve been doing after the break up, and impose his/her presence in your life trying to get you back.

With the advent of the internet and social media, and a fast way of communication, simple crimes got their upgrades, and so did stalking, being called now cyberstalking, in which the cyberstalker uses social media and other social platforms for instant communication to find his/her victim, harass him/her, send messages, spread rumors to end certain connections. The use of fake id’s has also been notified as a tool the cyberstalker utilizes to approach his/her victim. It is a concerning matter since our privacy is invaded and we feel restricted in an online world that revokes freedom. We’re reduced to being stuck in our houses, away from this cyber world because one or many individuals decided we do not deserve to have our freedom and rights to privacy respected.

We see it in chats nowadays, users that lurk in different accounts to keep tabs on what we do, react to what we say, take screenshots of our cams, giving us the impression and the feeling of being in constant danger and of being completely powerless to fight it. Often we blame ourselves for what is happening, but it was never our fault to say no, or to set some boundaries and along the way that person or people couldn’t handle our choice of keeping them away.

As I sit and watch my screen get filled with words of hate, anger, resentment because a man or a woman dared to say no to any further interactions with a user, I wonder if what we faced here was also a case of cyberstalking. Chat rooms are a vehicle of communication like any other, where we gather to chat about many topics, where we show ourselves on cams, and chat away not thinking much of the world. How can one be responsible for some little infatuation that happens there? How can one be blamed for the actions of some person who got hurt and offended for not getting the attention he/she needed or craved for? The answer is: we can’t be blamed or take the responsibility of it. We’re mere victims of a crime that yet does not have much legal punishment, aside from a few laws here and there.

Cyberstalking in chat rooms is real, and here at least on ZoZo our staff Works hard to keep our users safe from such people.