Conrad Roy and Michelle Carter met online and decided to chat for a while. What seemed like innocent fun turned into a relationship. Unfortunately, Conrad Roy was battling with depression, anxiety and suicidal thoughts. His girlfriend, Michelle Carter, was one of the few people he could talk to about his feelings and everything else that he was going through. Michelle carter knew her boyfriend was feeling suicidal for over a week and she didn’t help him seek help, in fact, she urged him to commit suicide and told him, “you can’t keep doing this everyday, you just need to do it.” The young lady even helped him choose his method of death, death by carbon monoxide poisoning. She continued to encourage him even though he had reservations about commiting suicide! He had a family he didn’t want to leave behind, younger sisters, a grandmother. The day they planned for him to commit suicide, he took his two younger sisters out for ice cream, and exchanged texts with his girlfriend:

Carter(girlfriend): Okay. I’m serious. Like you can’t even wait ‘ill tonight. You have to do it when you get back from your walk.

Conrad: I do want to but I’m like freaking for my family I guess. I don’t know

Carter: Conrad, I told you I’ll take care of them. Everyone will take care of them to make sure they won’t be alone and people will help them get through it. We talked about this and they will be okay and accept it. People who commit suicide don’t think this much. They just could do it.

Conrad: Like, I want them to know that I love them.

Carter: They know. That’s one thing they definitely know. You’re over thinking.

Following this exchange, Michelle went out of the house and talked to Conrad for 43 minutes. According to the court documents, there was a moment when Conrad panicked and stepped out of the car, but Michelle allegedly convinced him to get back inside the car, where the 18 year old died thereafter. The really disgusting part of this story is how she quickly posted his picture via twitter, and wrote about how she misses him. 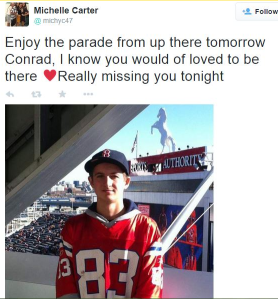 Moral of the story: Stay away from sociopaths! 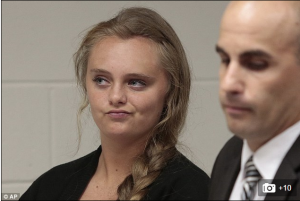 The Dangers Of Meeting Strangers Online